Call for applications to the ITF Grant Making Panel

The International Trans Fund (ITF) is seeking applications from committed activists to be members of the Grant Making Panel (GMP). The deadline for submitting your application is January 13, 2020.  Applications can be submitted in either English or Spanish, the two official working languages of the ITF.

Background
Trans groups across the globe remain severely under-resourced and operate with limited or no budgets. The State of Trans Organizing, a survey of 455 trans organizations conducted in 2016 by AJWS (American Jewish World Service), GATE (Global Action for Trans Equality) and Astraea Lesbian Foundation for Justice, found that two out of five trans groups had zero external funding and only 40% received foundation funding. 56% of trans organizations operated on a budget of less than USD$10,000 yearly and over three-quarters (78%) had annual budgets of less than USD$50,000. To address this disparity, a group of international trans activists and donors came together to create the International Trans Fund (ITF).

The ITF is a participatory grantmaking fund made up of trans activists and donors. The ITF aims to increase the capacity of the trans movement to self-organize and advocate for trans people’s rights, self-determination, and wellbeing.

The purpose of the fund is to:

What does “trans” mean to the ITF?

As part of the ITF’s commitment to self-determination and decolonizing bodily oppressions, we are permanently committed and open to recognizing gender identities that emerge and that our communities claim within their socio-political contexts. These arise from the ongoing work of resistance and liberation that involves both the remembering and reimagining of gender identities and expressions. The ITF does not privilege any one gender identity or expression over another, including those communities who do not have specific terms to describe who they are.

ITF’s Grantmaking
The ITF is a participatory grantmaking fund and we take an activist-led approach that engages trans people in our grantmaking process. This means that trans people are actively involved at every stage, from determining funding priorities to reviewing applications and making decisions about which groups get funded. All eligible applications that are submitted to the ITF are reviewed by the GMP.

Roles and Responsibilities of the GMP
The role of the GMP is to review grant proposals submitted to the ITF and make decisions on these grant applications in line with ITF’s priorities and principles.

GMP members have the following responsibilities:

Time Commitment
In order to fulfil this position, GMP members must be able to commit to the following:

Optional qualifications: It would be desirable for candidates to:

Conflict of Interest
GMP members or their family members cannot be significantly involved in any group that has applied or will apply for funding from the ITF. GMP members may not benefit financially from the grants assessed or existing ITF grants.

Timeframe
GMP members will be appointed by the Steering Committee for a two-year term.

Selection process
The Steering Committee will select 9 activists to serve as GMP members. When selecting candidates, every effort will be made to ensure diversity across regions, gender identities and expressions, and representation from further marginalized groups within trans communities.

Apply
Please submit your CV and cover letter to info@transfund.org by January 13, 2020.

The ITF made our first grant in 2017 and since then we have disbursed $1.815 million dollars to 75 trans-led groups in 51 countries. Now we would like to introduce you to our third cycle grantee partners. These groups were selected by the ITF’s Grant Making Panel, a group of trans and gender non-conforming activists who review each eligible application that we receive to our annual call for applications.

This year we are thrilled to support 38 trans-led organizations in 32 countries. These organizations are doing incredible work on the frontlines, often in very hostile contexts and with limited resources. We are proud to support organizations that are promoting trans leadership and working intersectionally. We invite you to learn more about the ITF’s third cycle grantee partners and join us in celebrating and amplifying this powerful movement building work. 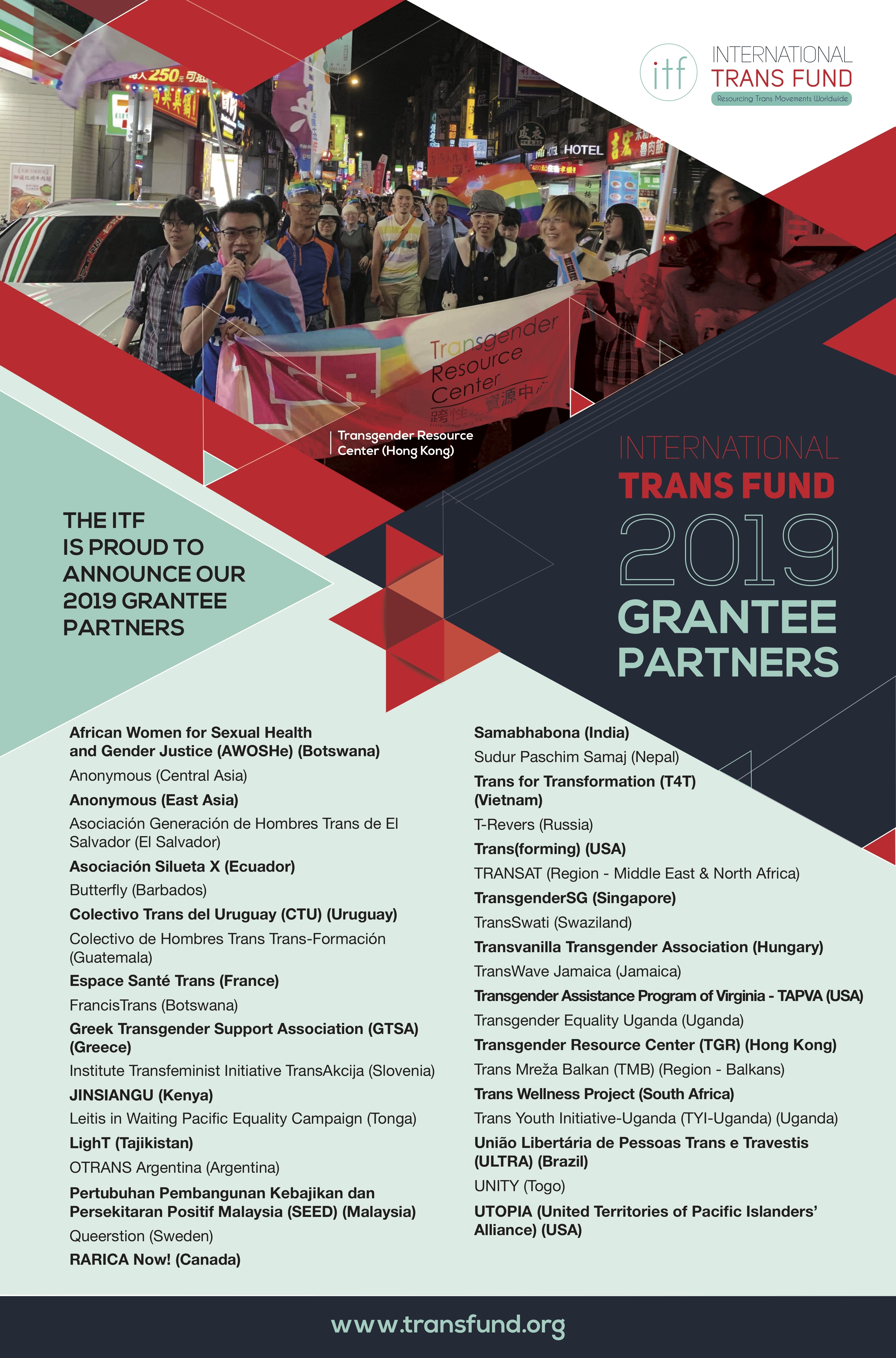 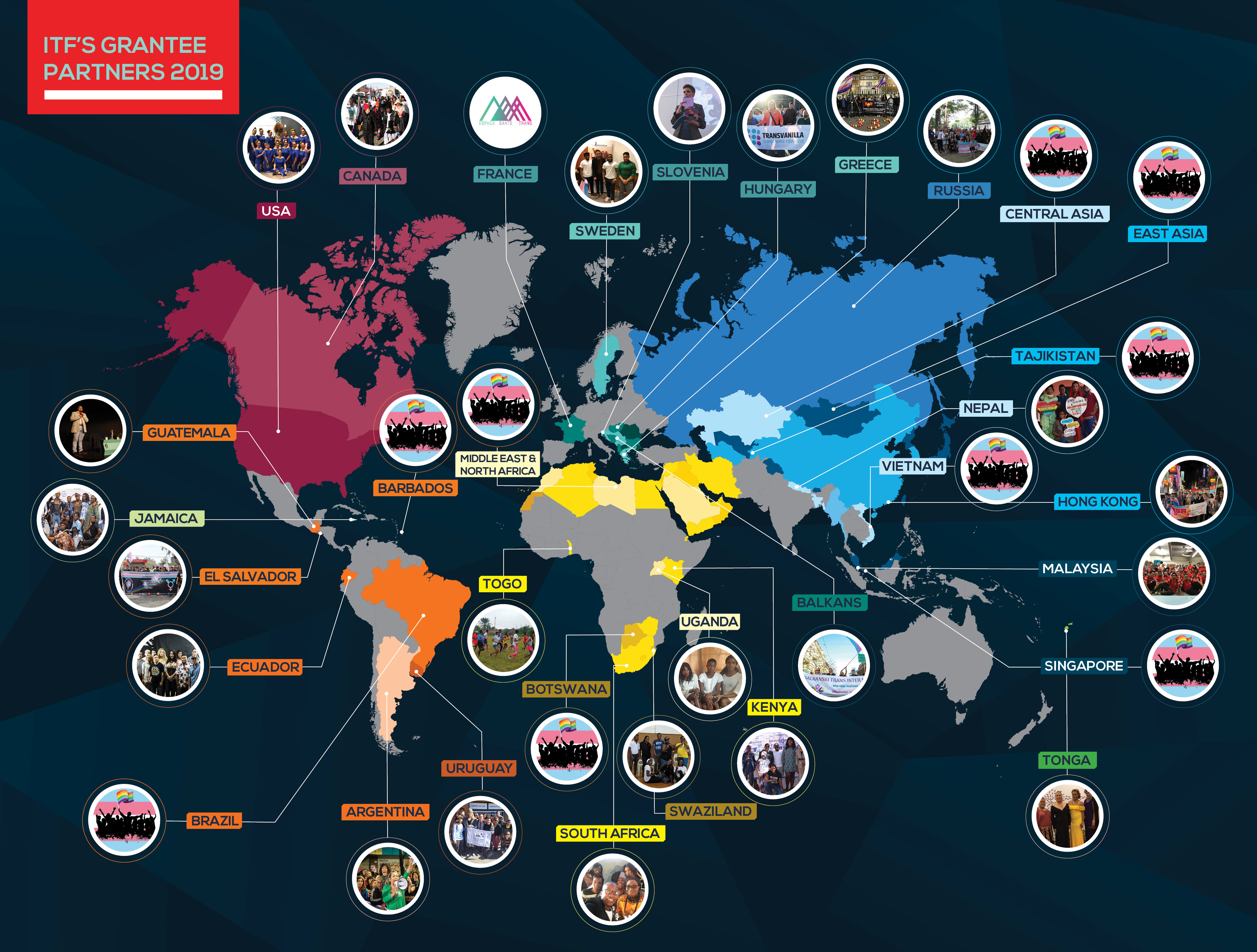 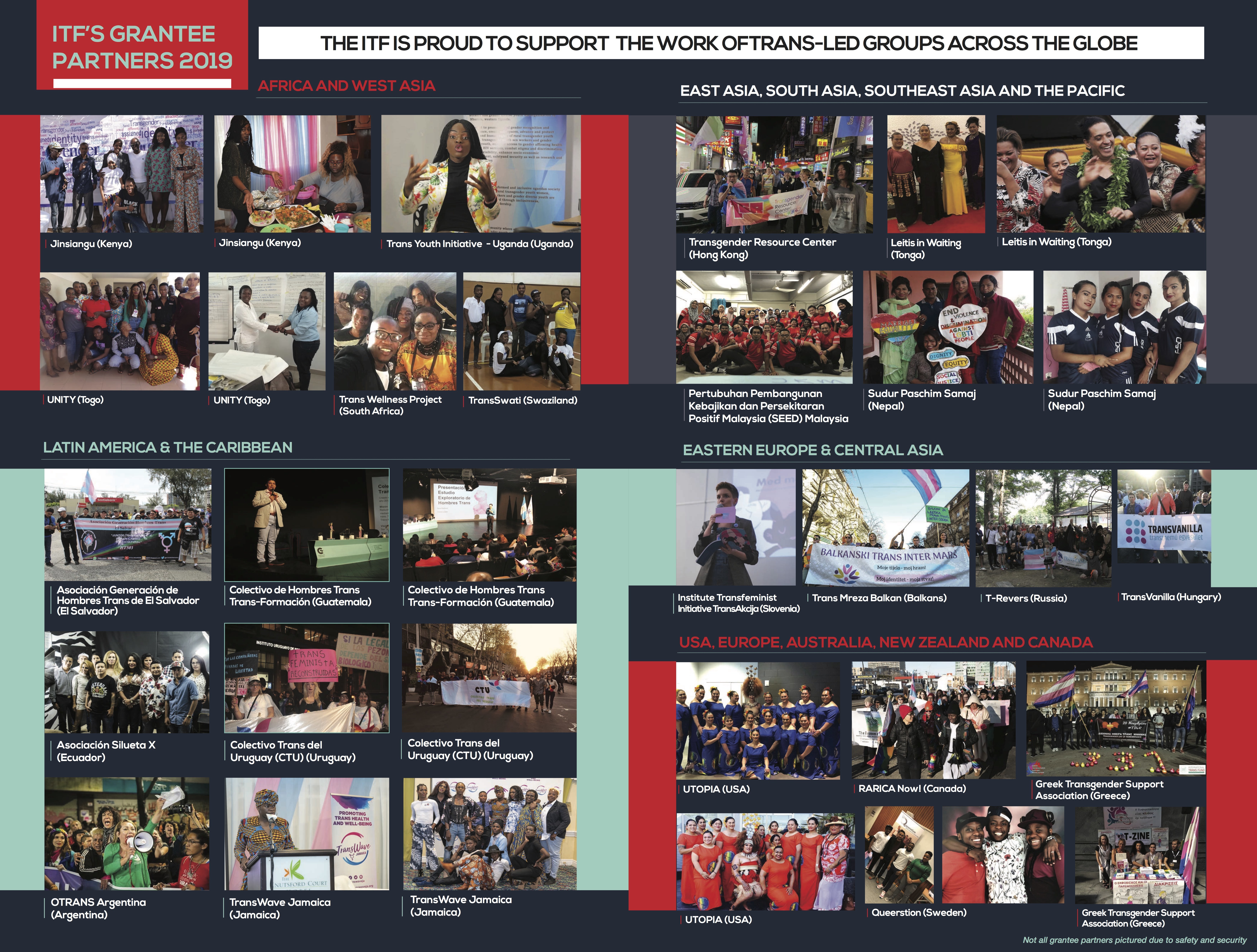